At the Presentation Ceremony of The Ombudsman’s Awards on 8 November 2019, the Ombudsman of Hong Kong, China, Ms Winnie Chiu, emphasised that the promotion of good public administration is the primary focus of the Office of The Ombudsman’s work. Following its complaint handling and direct investigations, the Office makes recommendations for improvement and proactively monitors the progress of implementation. In addition to holding the annual Awards, the Office has introduced a new incentive of issuing appreciation letters to public officers in recognition of their efforts to resolve complaints.

Ms Chiu said, “Most of the public officers who have come into contact with us are dedicated to their work and maintain a positive attitude in treating and handling complaints. The co-operation and contributions from all parties concerned enable the Office of The Ombudsman to enhance the standard of public administration in Hong Kong and bring about a better society.”

The Grand Award this year went to the Immigration Department (ImmD). This is the fifth time that the ImmD has been presented this honour, which demonstrates its consistent excellence in complaint handling and customer service over the years. In response to the Office’s inquiries and investigations, the ImmD provided clear and comprehensive information, and communicated with the Office’s investigators with positive replies. Where appropriate, the ImmD also reached out to the complainants to explain the department’s policy and arrangements, and offered them proper assistance. It also treated the Office’s direct investigation with importance and often implemented improvement measures at an early stage.

The Post Office (PO) and the Social Welfare Department (SWD) were also winning organisations. The PO not only often gave clear and sufficient details in regard to the Office’s inquiries and investigations in a timely manner, but also promptly admitted to its inadequacies after they were identified. Moreover, it took the initiative to adopt remedial measures, and was willing to accept and expedite the implementation of the Office’s recommendations.

The SWD adopted a pragmatic and positive approach in handling complaints. It often provided clear and helpful information for the Office to swiftly and fully grasp the sequence of events, which in turn allowed the Office to give complainants thorough accounts of its observations about their cases and make recommendations for improvement.

The Food and Environmental Hygiene Department (FEHD) was presented the Award on Mediation for a public organisation this year. During the past year, FEHD cases made up nearly a fifth of the 205 cases the Office handled by mediation. The FEHD strove to explore a win-win solution with the complainants. The complainants, having participated in the mediation process, also approved of the effectiveness in resolving disputes by mediation.

At the presentation ceremony, Ms Chiu commended the contributions made by the public officers who won the Individual Awards. She said, “Government departments and public organisations that deliver quality performance are invariably backed by a team of professional and outstanding staff. This year, 54 public officers are presented the Individual Awards to recognise their courage in accepting responsibility and diligence in handling complaints. They have made valuable contributions for the promotion of a positive complaint culture.”

The Ombudsman’s Awards Scheme was introduced in 1997. In 1999, the Scheme was extended to honour individual public officers. In 2018, an additional Award on Mediation for a public organisation was introduced. 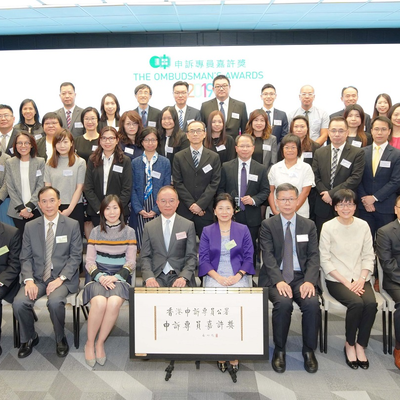 This year´s Ombudman´s Award went to the Immigration Department (ImmD), which has been rewarded for the 5th time for its excellent work