The Chairman of the Ombudsman of the Republic of Indonesia, Prof. Amzulian Rifai stated that in 2019 there would be no more ministries in the Red Zone or low levels of compliance, as well as institutions. At the ministry level, which is still in the Yellow Zone, or the moderate level of compliance is the Ministry of Agrarian Affairs and Spatial Planning and the Ministry of Social Affairs. Whereas at the institutional level, those who are still in the Yellow Zone are the Agency for the Assessment and Application Of Technology (BPPT), the Indonesian National Police and the National Agency of Professional Certification.

"The Ombudsman of the Republic of Indonesia conducts an assessment and checks the level of compliance with public service standards in the Ministries, Institutions and Local Governments. This is in line with the Presidential Regulation Number 2 of 2015 concerning the 2015-2019 National Medium-Term Development Plan (RPJMN), which requires the Central Government and Regional Governments to comply with Law Number 25 of 2009 concerning Public Services," explained Amzulian, Wednesday (27/11/2019) at the Grand Ballroom of JS Luwansa Hotel, South Jakarta.

According to Amzulian, the Compliance Survey is intended to prevent maladministration in the Government's public service units by meeting the service standard components as stipulated in Act Number 25 of 2009 concerning Public Services. In addition, it is also to find out the effectiveness and quality test of public service providers.

The Compliance Survey aims to encourage compliance with public service standards in order to accelerate the improvement of the quality of public services. Observing physical appearance, sudden observation, and photographic evidence performs compliance survey data collection mechanism. The data retrieval period is carried out simultaneously in July and August 2019.

Source: Office of the Ombudsman, Indonesia 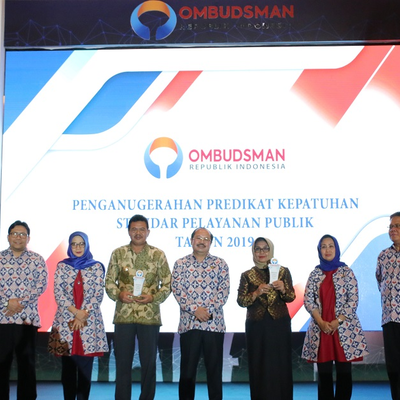