The Ombudsman of the Republic of Sierra Leone, Leon Jenkins-Johnston Esq. and the Commissioner of the Anti-Corruption Commission Francis Ben-Kaifala Esq. have on Tuesday 2nd July 2019, at the Office of the Ombudsman at 26 Charlotte Street in Freetown, signed a Memorandum of Understanding (MOU) on behalf of the two institutions. The aim of the MOU is to foster collaboration among the two institutions in the fight against Corruption, Administrative Injustice and Maladministration in the Public service.

Making a statement before the signing, the Ombudsman of the Republic of Sierra Leone, Leon Jenkins-Johnston, gave a brief background to the establishment, functions and powers of the Office of the Ombudsman. He noted that the MOU is a statement of intent of the two parties to work collectively and cooperatively to identify issues related to corruption and accountable governance in public administration to develop strategies to enhance the performance of their respective responsibilities.

He stated that the Office of the Ombudsman, and the Anti-Corruption Commission acknowledge each other’s  respective need for, and interest in the information to be shared relating to governance in the public administration and corrupt practices.

The Ombudsman further stated that, corruption is a cankerworm in any society and it impedes on the effort of the government in meeting its obligations and aspirations.

The Ombudsman warned those who have being treating the Office of the Ombudsman with contemptuous levity, that it will no longer be business as usual, and assures the ACC Commissioner of his office’s fullest cooperation and pledge to join in the crusade against corruption for the betterment of all as Sierra Leoneans.

Delivering his statement, the Commissioner, Anti-Corruption Commission, Francis Ben-Kaifala Esq. said that the signing of an MOU with the Office of the Ombudsman is a momentous occasion that will go down in the history of this nation as cementing the synergy and coalition that is being built against Corruption in the country. He noted that the issue of public accountability and corruption has plagued the nation and this MOU will serve as a broker in the fight against administrative injustice.

He revealed that, there are institutions that were created before the ACC and the Office of the Ombudsman, but these institutions have not been able to reach its full potentials, probably, because these actions that have taken place today have not being in place. He noted that a strong cloud is building against Corruption, Maladministration and against things that have stood before the country, preventing it from attaining its full potentials.

Commissioner Kaifala, stated that the signing of the MOU is a time to witness when two strong institutions in the country and now joining together for each other to be an extension of the other, wherein they can call on each other when the supported is needed.

He noted that this is a new era for the country and committed his commission and staff readiness to work with the Office of the Ombudsman.

The signing and exchange of MOU formed the highlight of the ceremony. 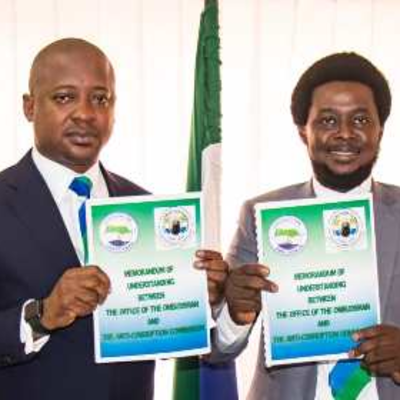